How to probe tiny samples? Insights into the production of micron-sized cold neutron beams

The NMI3 Imaging JRA discusses how to produce smaller beams. They conclude that reflective optics offers the most versatile way to produce them. 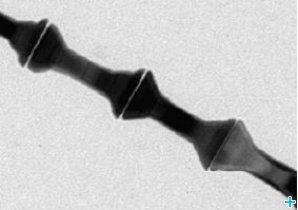 Neutron beams for condensed matter studies are traditionally big, macroscopic beams, mostly because of the limited neutron flux. However to probe small samples with a high spatial resolution by neutron imaging, it is necessary to use micro-sized (1–50 µm) thermal or cold neutron beams. A group of scientists from France, Russia and Spain have just published a paper where they discuss various possibilities to produce such micro-sized neutron beams. This work is conducted within the NMI3 Imaging Joint Research Activity .

In the paper they describe three ways of producing sub-100 µm thermal neutron beams by using:

They concluded that reflective optics offers the most versatile way to produce tiny neutron beams while also enhancing signal-to-background ratio. With this technique the size of the micro-beam can be easily tuned by simply rotating the reflecting mirror. Being able to work off the direct beam provides an excellent signal/noise ratio even if the incident neutron intensities are low. The scheme will be tested on the new radiography station IMAGINE at the Laboratoire Léon Brillouin in France.

This work is supported by NMI3 through the Imaging JRA.

New imaging methods will offer new possibilities to physicists, material scientists, engineers, palaeontologists, archaeologists, and others, so that they can obtain better information on their objects of study. See our video and article here!

Watch Zoltán Kis and László Szentmiklósi from the BNC describe their work as part of the Imaging JRA. To see the video click here.

Neutron tomography experiments revealed that some forerunners of mammals were already able to hear airborne sound thanks to an eardrum at the lower jaw, an impedance matching middle ear and a small cochlea. Read more.

Back to previous page