How can muons be used for research? 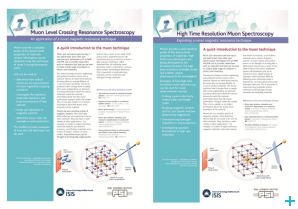 Have a look at our two leaflets to learn about high field muon spectroscopy. You can download them at http://nmi3.eu/about-nmi3/joint-research-activities/muons/outreach.html

µSR is a collection of methods that uses the muon spin to look at structural and dynamical processes in the bulk of a material on an atomic scale.

When the term was first coined the following explanation was given: “μSR stands for Muon Spin Relaxation, Rotation, Resonance, Research or what have you. The intention of the mnemonic acronym is to draw attention to the analogy with NMR and ESR, the range of whose applications is well known. Any study of the interactions of the muon spin by virtue of the asymmetric decay is considered μSR, but this definition is not intended to exclude any peripherally related phenomena, especially if relevant to the use of the muon's magnetic moment as a delicate probe of matter.”

Although muons are produced in a variety of high-energy processes and elementary particle decays, μSR requires low energy muons that will stop in the samples being studied. Low energy muons are available in the required intensities only from ordinary two-body pion decay. Thus, before making a source of muons, one must make pions. Pions are produced in sufficient numbers from collisions of high-energy protons (>500 MeV) with the nuclei of an intermediate target. A light element such as carbon or beryllium is used for the primary target in order to maximize pion production, while minimizing multiple scattering of the proton beam. The charged pions that are produced live for only about 26 billionths of a second and then decay into a muon and muon neutrino (antineutrino).

For more information about how muons are made, watch the Making Muons movie here. 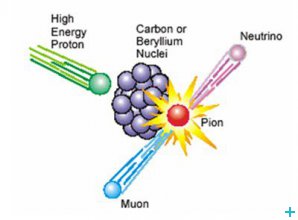 Why does µSR work?

μSR is made possible by the unique properties of the pion and muon decays:

First, surface muons are perfectly spin polarised opposite to their momenta, so when a muon is transported down the beam line to stop in the sample being studied, it arrives nearly 100% spin polarized. This is a significant improvement on other magnetic resonance probes such as nuclear magnetic resonance (NMR) and electron spin resonance (ESR) methods that must rely upon thermal equilibrium spin polarization in a magnetic field so that sufficient polarization is often achieved only at low temperatures and/or in strong magnetic fields.