A team of scientists and technicians designed a more efficient stopped-flow observation head that can make SANS experiments easier and more efficient to conduct. Watch our new video to know all about it!

Click to watch our video of Eddy explaining the new stopped-flow observation head.

Most of the world’s neutron facilities have Small Angle Neutron Scattering (SANS) instruments rely on the most frequently used rapid kinetics technique called stopped-flow. This system is important because it allows to initiate a fast reaction from small volumes of two or more solutions, which has applications e.g. in the study of size and shape of proteins, and drug delivery. A team of scientists and technicians, who were part of the NMI3 Joint Research Activity (JRA) on Soft and Bio Materials, worked to improve the observation head. They made it easier and more efficient to change the sample, made it possible to control the temperature in which experiments are conducted (±0.5°C stability), and reduced the volume of costly samples used by as much as 40%. 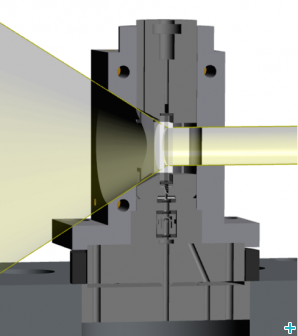 Head (stopped-flow) 3D CAD view of the head crossed by the neutron beam. Liquids are introduced from the bottom using syringes driven independently and mixed right below the beam.

3D CAD view of the head crossed by the neutron beam. Liquids are introduced from the bottom using syringes driven independently and mixed right below the beam.

It works in a rather simple way. The mixture is introduced with driven syringes in an observation head placed on the neutron beam. Every few minutes, once the reaction is complete, freshly mixed reagents replace the old mixture to gather enough data for the necessary statistics.

In the video, Eddy Lelièvre-Berna, who is Head of Services for Advanced Neutron Environment at the Institut Laue-Langevin (ILL) in France, shows the new stopped-flow observation head.

The cell containing the liquid mixture is made of quartz and placed inside the observation head. Before NMI3-II, the temperature of the mixture in the cell was unstable and it was not possible to control the temperature in the syringes and in the cell separately. The total sample volume necessary to collect enough data to understand kinetic reactions was also too large, which often translated into high cost.

The team was very successful in producing a new stopped-flow observation head. They have designed a head that makes it easier to change the sample thickness and temperature. This is done more efficiently, as the head is compatible with different quartz cell sizes and heights. The temperature of the syringes can be controlled independently from that in the cell, making it possible to have a 10-15°C difference, or even more, between the syringes and the head (the so-called T jump). This means that, during an experiment, scientists can suddenly heat-up freshly mixed reagents to higher temperature. Additionally, the head is now insulated so that the mixture is not affected by external variations of temperature. The insulation is designed with quartz windows to keep a good signal-to-background ratio in the detector.

Furthermore, they reduced the amount of sample used in an experiment by 40%. Given that the neutron beam was 10 mm in height and the cell was 25 mm, they thought that a very simple way to reduce sample waste was to reduce the size of the cell. This step reduces the volume of sample used, thus reducing the cost of experiments considerably. However, as some instruments require larger beams, the head is designed so that it remains compatible with 25 mm cells.

European collaboration for broad use

Scientists from different facilities were involved in this task, coming from ILL, the Laboratoire Léon Brillouin in France, and the ISIS neutron source in the UK. All neutron facilities in the project currently use stopped-flow systems, but the instruments where it is installed are different, which requires different dimensions. The group was thus concerned in delivering a prototype that could be easily adopted by all of Europe’s neutron facilities. The NMI3 collaboration made it easier for them to meet and get all necessary information together to make this possible. We hope the new stopped-flow head will serve many scientists!

NMI3 thanks Eddy Lelièvre-Berna for reviewing this article.